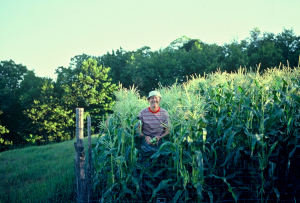 My Uncle Royal would have turned 100 this year had he lived. As it was he lived the most productive and full life of anyone I know. Farmer, woodsman, naturalist, gardener-extraordinaire, mechanic, builder, business and owner, and as a long-time Vermont state legislator he wrote and got passed some of the earliest conservation and clean environment laws.

I guess I should add “dentist” to that list. Somewhere in his late 30s he did what apparently a few backwoods* farmer did in the 1940s-he sent away to Sears and Roebuck, in Chicago, for a do-it-yourself mail order denture kit. I don’t want to even think of what he did to extract his teeth! So, he got this kit in the mail with instructions on how to mix-up the goop and bite down on the filled trays in his mouth. Then he package it all up, checked-off the tooth color and size, and presto he had a new set of dentures in the mail six weeks later!

As a young boy I recall that these dentures stuck-out. Literally. And the plastic gum was an unhealthy orange color, Yecch! Although, to be accurate it was denture, singular, because he never wore a lower one. But boy could he eat with that one denture! He attacked his favorite meal, corn on the cob, like a hog in heat! Pieces flew up, down, left and right. And the louder the better! The family learned to politely ignore this, but my high school friends would make the drive up from Boston just to stare and watch the show!

Years later, my older brother John graduated from dental school and moved home to practice and as one of his first duties, made Uncle Royal a set of new dentures.(who really was more of a dad since he helped raise us all). We all agreed that Uncle Royal’s new dentures looked great and he said they fit much better. Several months went by and John discovered that he was hiding the fact that he wasn’t wearing the new lower denture. This went on for several years and my brother made several lower dentures all with the same result-Uncle Royal would quietly hide them away in his closet!

Flash forward 20 years later and now I’m the young doctor and Uncle Royal has his RV parked at my house escaping the Vermont winter for two months, and I , always wanting to outdo my older brother, make Uncle Royal a new set of dentures-with the same result-another lower denture in the closet!

Moral of Story? Never look for a gift denture in the horse’s mouth?

No! It’s more simple, lower dentures don’t fit in the mouth the way upper ones do because they don’t have the same nice wide palate to rest on. Instead they have a narrow, shallow bony ridge with a slippery tongue constantly wiggling around!

Nowadays, I just put in some artificial tooth roots and either skip the dentures entirely or at least attach the denture over these “roots”(implants!).

Uncle Royal isn’t here to celebrate his 100th, but I am, so here’s to Uncle Royal-Happy Birthday Uncle!

* I can still see the 123 deer antlers over the garage and the bear head that growled down over us at the dining room table!

Free when you fill out this form.

Thanks to technology, we have multiple options for many of life’s … END_OF_DOCUMENT_TOKEN_TO_BE_REPLACED

If you’ve heard the phrase “Teeth in a Day” at some point, you may be … END_OF_DOCUMENT_TOKEN_TO_BE_REPLACED